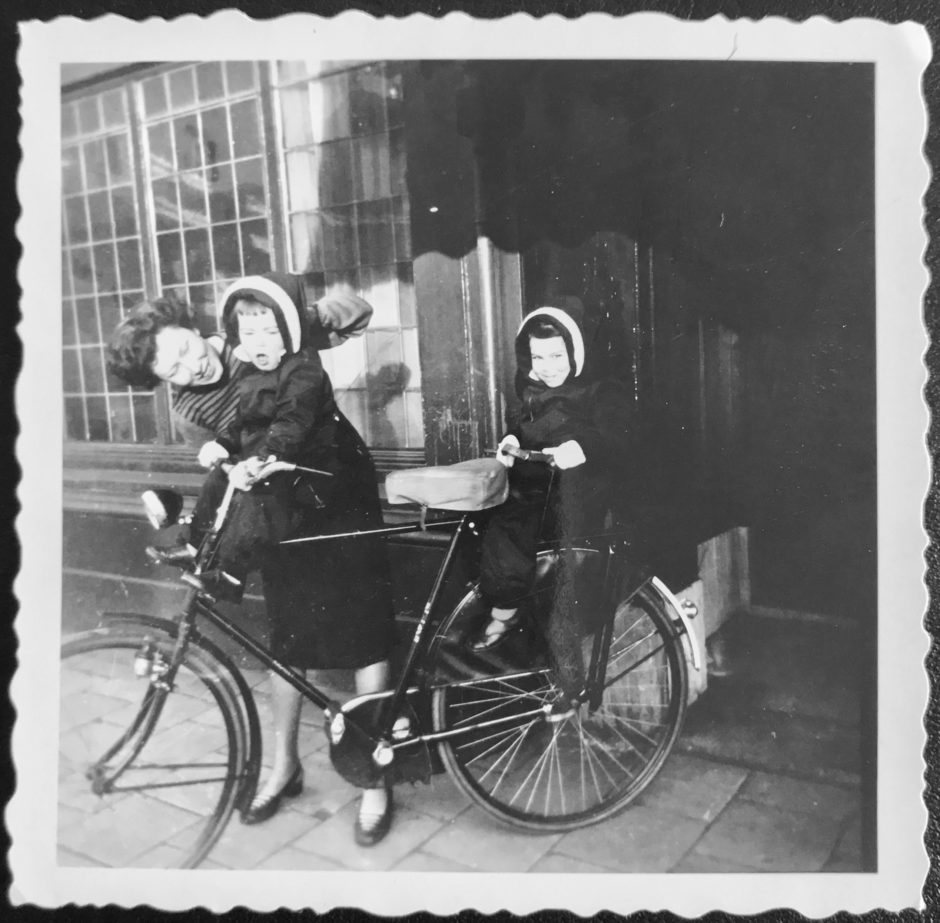 1952, Den Haag, Schenkweg. Mijn moeder Els, ik voorop, Patricia achterop en mijn vader Kees die met ons gaat fietsen maakt de foto.
1952, The Hague, Schenkweg. My mother Els, me up front, my sister Patricia on the backseat and my father Kees who is going to bike with us, is taking this picture.

A bicycle with two child seats used to be the most normal thing in the world. Back in the days. In the Netherlands. One up front. For the youngest. And one on the back. For the oldest. As the oldest child you had this privilege of sitting up front, always, but as soon as the second child could sit right up, you were sent off to the back seat with the story that that was the place to be for the oldest! And as firstborn you had to be happy with that. With the view of your mother’s or your father’s back.

Now that I’m writing this, it could just as well be an incentive for a small trauma. I don’t know. The firstborn giving up his or her unique place to a second sibling and some years later he or she is promoted to the back seat.

But I am the youngest and therefore don’t suffer from this one. As a youngest I have very different problems to tackle. And we’re not going to talk about that now.

Since a new company was started here that rents out rail bikes to cycle up and down the disused railroad track – as a pleasant outing – I have been confronted with a memory of a completely different order. Here too – as in the whole world – it is known that Dutch people are cyclists and since I also come from the Netherlands, the Portuguese think that I like cycling.

When my boys were little, I patiently explain to them, I cycled every day and every road. Obliged. Under all circumstances. Not only with two children on board but also with all the groceries. Daily. Supermarkets and a second car were not yet en vogue. We did have a grocery store, butcher and greengrocery on different corners of different streets. In those years I did cross all streets of The Hague.

My street knowledge was as good as that of the classic taxi driver. Especially when children all started playing together in their proper streets. Pick up and delivery was one of my daily tasks. Whether it was pouring rain, storm or sunshine. In my opinion I cycled my knees to pieces. Whether that is true? I don’t know. I think so.

By the time my boys were about nine years old they had their own bikes and could do all the cycling themselves. I stopped doing that heavy work and swore to never do that again. It took at least five years for my knees to function reasonably well again. And luckily it has remained that way to this day. So cycling is a passed station for me. I prefer to walk for miles than ever to pedal again.

And then here, in the middle of nowhere, I am confronted with that old decision. In a country where cycling is as unpopular as singing fado in Holland.

Every time I politely explain that I hate cycling. And then everyone comes with the advice that it is fun, surrounded by nature and that it’s not heavy (what do you mean? Not heavy? It is an uphill track for an hour or so). Even the argument of cycling together on one bike, so the burden is divided they say, doesn’t stick.

I listen to their stories, occasionally see participants return and think to myself: never ever again!